Well my fellow Chickweedians it's time for another tale about events hidden behind the wainscoating of our favorite comic.  It is an exploration of aspects of the very controversial did-they-or didn't-they tryst of Seth and Edda in July 2017.  I'm convinced their tryst was, er, successful.  What follows here is hint and inference run wild.  Be advised that this short story is extremely X-rated.  You have been warned.  If Brooke can push the envelope then so can I.

Addendum.  Events subsequent to these musings in this piece have been, unsurprisingly, quite different in the strip.

Addendum.  06/03/21.  Recent events in the strip indicate that Seth has not managed to quench his love and desire for Edda. 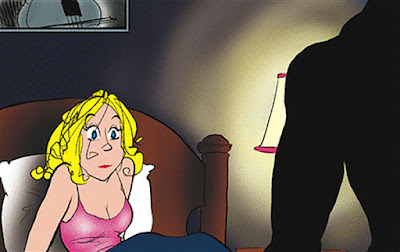 Read a wonderful George Will review of a new novel titled Class.  In the novel the protagonist, Karen, is an up to the second ultra-socially aware mom attempting to raise an equally up to the second ultra-socially aware daughter, Ruby, who unfortunately attends Betts, an ordinary moderately diverse middle school.  Karen becomes obsessed with getting Ruby into a better much more expensive school.

"Karen, who favors single-origin organic coffee from Burundi, takes Ruby to the artisanal ice cream shop with flavors such as Maple Fennel, and with no corn syrup. When Ruby, pausing over her organic Applegate turkey sandwich on European rye, pronounces a classmate’s lunch—white-bread sandwich, Cheetos, grape soda—“disgusting,”.  Karen frets that in her effort to simultaneously save “both the health of her daughter and that of the planet” she has produced “a hideous food snob.”  Ruby became such at her mother’s knee. Karen has one of her tsunamis of disapproval when another mother brings to a playdate chocolate-chip cookies with embedded Reese’s Pieces. “Dark visions of polyunsaturated cooking oil” addled Karen’s head. Her adherence to the “urban-farming movement” — evidently there is one — is strained by a restaurant offering “pan-seared locally sourced pigeon.”

"Reluctant to disadvantage her daughter because of her own progressivism, Karen lies about her residential address in order to sneak Ruby into a school that is less diverse than Betts but more financially flush, thanks to more affluent parents — the kind who arrange playdates by saying, “Have your nanny text our nanny.” Karen is, however, a virtuoso of guilt, and to assuage hers she embezzles money from the new school and mails it to Betts. By the time her lies and stealing are revealed, she realizes that her “negativity was like a wisteria vine that, if left to its own devices, would creep into every last crevice of her conscience.” So she returns Ruby to Betts, leaving behind the school where “the experimental puppeteering troupe Stringtheory is performing a kid-friendly version of ‘Schindler’s List.”

Aside from being funny as hell, that last sentence made me flat out sick with envy.
Posted by Darwin at 3:22 PM No comments:

Dateline Washington D.C.  The Washington Post today quoted anonymous sources who claimed that contact was made between administration officials and two shadowy Russian operatives named Boris and Natasha.
Posted by Darwin at 4:27 AM No comments:

The odious trend of school districts and colleges removing the novel Huckleberry Finn from their library shelves has encountered a perhaps inevitable wrinkle.  Students at one high school want the book removed from circulation because they are not "comfortable" with the frank language and the depiction of the lives of black slaves in the antebellum south.

Setting aside the ludicrous notion that an education should be guaranteed to hurt no one's feelings, ever, it has not been at all clear to me why Huckleberry Finn has taken such flak since it is one of the most powerful anti-slavery novels ever written.  It may have been eclipsed by Uncle Tom's Cabin in terms of its power to affect society, published as it was long after the Civil War ended, but Clemens' masterpiece is a stunningly adept and exquisitely written piece of literature that holds a special place of pride in American letters.  Its literary worth and anti-slavery credentials are beyond reproach.

So what is going on here?  In the past few years there have been a goodly number of books and moving pictures that lay out the manifold cruelties of slavery in extreme and horrific detail.  With varying success they are meant to grab you by the throat and pound the evils of slavery into your punkin' haid until you are drunk and disoriented by what an overwhelming mega-crime slavery in the U.S. was.

Huckleberry Finn on the other hand strives to illustrate the details of ordinary day-to-day life in the antebellum south.  It powerfully illustrates, not the gut wrenching horror of slavery, but the complete ordinariness and casual acceptance of it by people in the slave states.  In Huck's and Jim's world slavery was as ordinary as rain and sunshine, and was considered by the non-black population as utterly normal and uncontroversial.  It was this insidiousness, this casual banality of evil, that was one of the things Clemens so adeptly demonstrated.   His genius was to make Huck think past this banality and come to appreciate how dehumanizing it was to someone who had become a friend.

The only reason I can think of why the book has been removed from shelves is that it is just not horrible enough.  It depicts no vicious beatings, no rape, no wanton killing, and no vile sneering overseers hovering over slaves with whip in hand, nothing to get one's blood up to a rolling boil.  Nothing but simple everyday endemic lack of justice and concern for fellow human beings.  This ordinariness, this unremarkability, was the real poison of the antebellum south, and it goes a long way toward explaining the powerful inertia of southern society in regard to any change in the status quo.

People who criticize Huckleberry Finn as racist are not only incredibly wrong they are entirely  missing the point of the novel.  They should be pitied.